Get the latest Syracuse news delivered right to your inbox.
Subscribe to our newsletter here.

A memorial for the late Lorraine Koury sits in the center of Boom Babies surrounded by delicate jewelry and prom dresses. In the largest photo, Koury wears a striped shirt with a bright pink oversized belt and bold jewelry — an outfit that was “quintessentially Lorraine,” said co-store manager MacKenzie Wilkinson.

Koury, the woman behind Boom Babies, a vintage clothing store in Syracuse’s Westcott Neighborhood, passed away on Thursday, Sept. 15.

A shop of eclectic style, Boom Babies sells anything from glittery prom dresses to classic denim, trendy sunglasses to old-fashioned gold rings. The shop was under Koury’s care since opening its doors over 30 years ago in 1986.

The “Boom Girls,” Koury’s employees, wrote in a Facebook post the following Saturday that she was a “fearless, kind, generous, dynamic leader.” Wilkinson said she looked up to Koury, and that she was an amazing woman to work with and learn from, and simply as someone who went above and beyond for those around her.

“Over her 30 plus years in business, she empowered and mentored countless women who had the chance to work for her,” Wilkinson said. “She treated her girls like family and really a sisterhood that spans generations.”

Koury originally founded Boom Babies because her own collection of vintage pieces was too large, Wilkinson said. She spent a portion of her childhood in the grocery store her father owned, and seemed to always have an appreciation for small businesses and the dedication and passion it takes to run one, she said.

Meredith Graves, a past employee who worked at Boom Babies in the 2010s, did a little bit of everything during her time at the shop, including working the floor during prom seasons and some seamstress work. She said Koury was one of the most unique people she ever had the pleasure of knowing.

“Lorraine was a truly solid person — her energy was concrete. When she walked into a room, or even if you walked into the same room that she was in, it was like walking into a room at the Met,” Graves said. “Being around Lorraine was like being around the presence of a classical statue or a piece of architecture. Just solid.”

Koury hoped that her shop would make clothes and fashion fun for people, Wilkinson said, for both customers and employees. This held true for Nikki Kelly, who began shopping at Boom Babies in her childhood and still frequents the shop to this day.

“I grew up shopping in that store, and I got all my prom and ball dresses from there,” Kelly said.

Koury’s memorial in Boom Babies is filled with many framed photos of her, a bright variety of flower bouquets and a board filled with personal messages entitled “Love Notes for Lorraine.”

“We know how many lives she touched and changed in this store and in her personal life,” Wilkinson said. “It’s been really amazing reading the messages people have left her.” 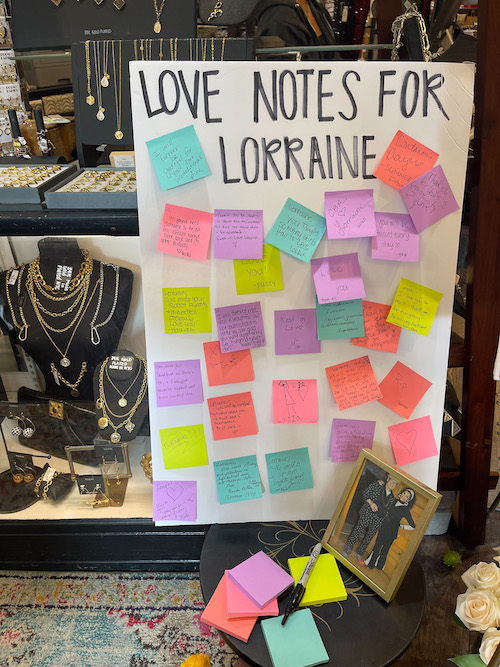 Wilkinson looks back fondly on the times she traveled with Koury to find clothes and dresses for the store. She said Koury was full of life, with a passion for eating and playing around in addition to her work at Boom Babies.

Graves recalled the time that Koury had spontaneously decided to fix her car with pink and black checkered duct tape, a color palette on brand with the aesthetic of Boom Babies. Graves ran all over town to find the exact right kind of duct tape and spent hours indulging Koury’s attention to detail on her car.

Graves was also part of a touring band. Though Graves could only work on and off at Boom Babies given her band’s schedule, Koury always came to the shows to support her passion.

Looking back, Graves realized just how much Koury affected the way she grew into herself. She was both the wisest and wildest person Graves had ever met in her life, she said.

“She insisted on everything being a specific quality and everything being treated with a certain degree of respect,” Graves said. “Seeing that at a younger age set me up to be the adult I am now. She had a massive impact on me.”

In Koury’s passing, the “Boom Girls” remember her as a fearless, caring, hard working person with a huge heart — a “one of a kind individual,” Wilkinson said.

“I feel really lucky to be a part of such an amazing legacy,” Wilkinson said. “She is an icon and will be missed.”