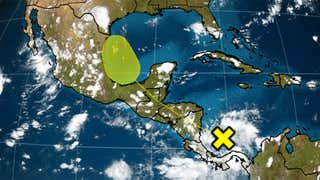 A disturbance is expected to crawl toward the western Gulf of Mexico through the end of the week where it could try to organize into a tropical depression and possibly enhance rainfall as far north as South Texas.

The system is located over Central America right now, as depicted by the yellow “X” on the map below, and is producing disorganized showers and thunderstorms.

Land interaction with Central America and southern Mexico should prevent any significant development of this system over the next couple of days as it tracks northwestward.

This system will reach the waters of the southwestern Gulf of Mexico Friday. That’s when it will have to be more closely monitored for signs of low pressure becoming better defined with more concentrated shower and thunderstorm activity. If that happens, then it could form into a tropical depression, although it will have a limited amount of time to do so.

At this time, the National Hurricane Center says there is a low chance this system will develop into a tropical depression.

Regardless of development, high pressure should steer the system inland over the weekend somewhere between Mexico’s northeast Gulf Coast and the Texas border. That could at least allow it to bring a surge of tropical moisture that enhances rainfall in these areas.

If heavier bands of rain reach as far north as South Texas, then it could bring more drought help to a region that was soaked by another tropical disturbance last weekend. That recent soaking could also increase the chance of localized flash flooding. But at this time, it’s too soon to know much rain this system will help lift northward into South Texas.

In the meantime, the tropical wave will help enhance rainfall over parts of Central America and southern Mexico as it tracks northwestward over the next few days.

Hurricane season is entering its typical peak in activity which includes late August, September and early October. The next named storm in the Atlantic will be Danielle.

Check back to weather.com frequently for updates on what to expect in the Atlantic through the coming weeks.

The Weather Company’s primary journalistic mission is to report on breaking weather news, the environment and the importance of science to our lives. This story does not necessarily represent the position of our parent company, IBM.