The holidays are upon us and everyone is spending time with their families. Even so, there are still more updates about Eiyuden Chronicle: Hundred Heroes. With the year winding down the team at Rabbit&Bear Studios is still hard at work providing us with updates as we gear up for a scheduled release next year. They have some words to share with us as well as a new character reveal. So let’s get into it! 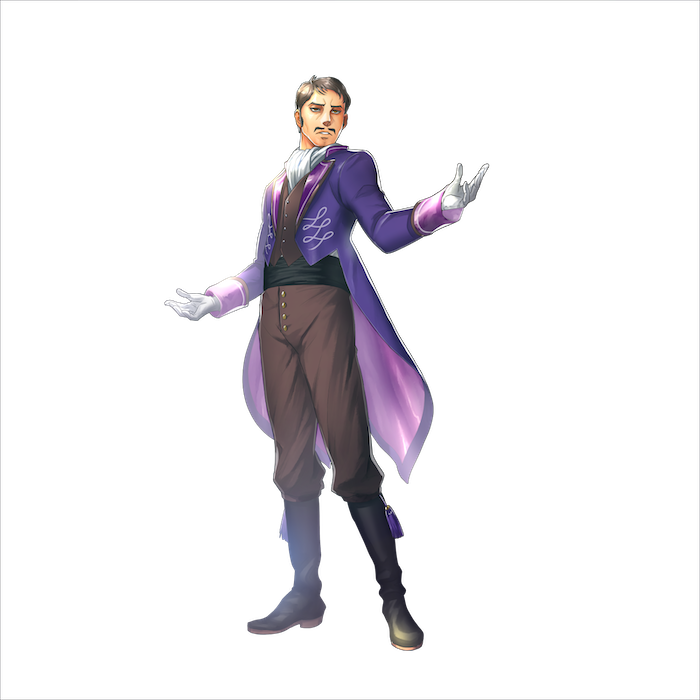 The latest Eiyuden Chronicle character we get a little insight into is Clarke. Clarke is a 55-year-old male who is a middle-aged divorcé that manages the theater. He’s from the League of Nations and loves to drink Herbal Tea. It is said that not much fazes him anymore, but now and then he’ll discover some new play and gab about it with the passion of someone younger. In the past, Clarke put so much energy into his theater troupe that his wife left him. So that was a really hard time for Clarke.

At the theater, he is seen always wearing a suit and coat. He is said to be careful about how he presents himself. Clarke still likes to keep up with the sense of wonder and imagination he wants to project on stage. You could picture Clarke saying things like “The stage is my life, and I live for the stage.” Also, you can picture him saying this, “Ladies and gentlemen: tonight, for your enjoyment, I present this fleeting dream. Let the show begin!”

When it comes to Clarke and his love of theatre Kuwano said this:

Clark is a man who loves the theater, but he is a presenter and an organizer, not the showman himself. I wanted to give the impression that he was always considering his next scene, so I gave him a slight look of consternation. The theater in the game is going to have a huge number of variations when it comes to character interactions, so I’m excited to start experimenting with them!

When it came to his update for this month Murayama focused on the Theatre System for Eiyuden Chronicle: Hundred Heroes and said this:

The main town in Eiyuden Chronicle: Hundred Heroes will have a lot of mini-game facilities, one of which being The Theater. This works by assigning characters roles in your play of choice and then having them perform for their friends. Depending on the character, you can enjoy watching them play their roles faithfully, over-enthusiastically, fumble their lines, or shorten them on purpose! This variety should be a lot of fun to watch unfold.

Isn’t it exciting to imagine how Nowa, Seign, Marisa, and the others will react in their roles? We want to have a system in Eiyuden Chronicle: Hundred Heroes that lets as many characters as possible have their time in the spotlight. The theater is one such system. We hope you look forward to seeing how your favorite character performs on stage. Not only that, but we’re also recording voice lines for the theater and the experience has been filled with enthusiastic performances, laughter, and praise. This dialogue contains some 15,000 lines of text, which is roughly the amount you would expect to see in a regular game.

A Word From The Team

From the Eiyuden Chronicle team this month Murakami J wanted to talk about a few things and said this:

Hello, Murakami J here. Now the mayhem of the Tokyo Game Show has passed, we are all hands on deck and busy every day. Thanks to the hard work of our team, we finally have the basic materials for the main characters and backgrounds. So we are pushing ahead with making the remaining materials. Since much of my day is filled with a lot of meetings and supervision work. I’ve been working on adding material little by little once my regular work is done. I’ve recently been making characters for the hot spring scenes and such.

Simply putting characters into hot springs is tough in Eiyuden Chronicle: Hundred Heroes. One scene alone means X(100 + α) more cuts to make (lol). To that end, and to avoid panicking down the road, I’m doing my own work whenever I get a chance. But in doing that, I’m faced with a number of questions. For example, “Isn’t it weird for this character to wear a hat in the hot spring?” or “They’ll have to tie their long hair up before getting in the water,” are just for starters. What about what they’re wearing under their outfits?

I approached one character after the other, putting together bath time versions for each, and after a while, it’s now possible to tell who is who, even in their bare pixel form! How cool is that? I was actually a little worried. You see, usually changing the costume, accessories or other distinctive features like a character’s hairstyle on their pixel art is likely to make many of them look the same as one another, especially as there are so many. But that didn’t happen this time. The individuality of each character is pretty clear.

Murakami also explained it some more:

I think this comes down to everyone having unique physiques and physical expressions—something we talked about a few times at Tokyo Game Show. I thought changing even the quirky hairstyles would be difficult, so I was very happy in a humble way (even though I made them myself…lol). So, I hope you look forward to the hot springs bringing out a different side to the characters. Eiyuden Chronicle: Hundred Heroes is filled with a lot of things to enjoy outside of the main storyline, so I’m sure things will only get busier for us going forward.

These elements aren’t just bonus content and each has a meaningful place within the game. We want to proceed without forgetting to focus on even the smallest of details. Ahhh… Talking about hot springs is making me want to go to one, myself. It’s becoming the perfect time of year for them. Come to think of it, how many countries in the world have a hot spring bathing culture? I should find out.

Something we should be able to start expecting in these Eiyuden Chronicles: Hundred Heroes updates are more explanations of the mini-games and other features. Even though not a major part of the story or anything you will be able to sink hours into these. I believe soon we will start to get some minor clips of art or tidbits of mild gameplay. The release of Eiyuden Chronicle: Hundred Heroes is currently still expected for 2023 around the fall. You can check it out on all platforms as well as Game Pass on day one!