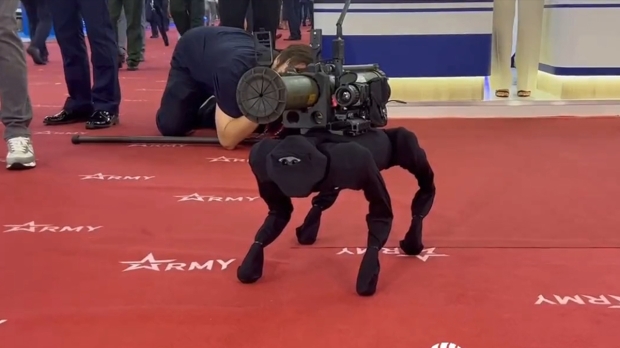 Another robot dog emulating the design of Boston Dynamics’ iconic Spot robot has been shown off while equipped with high powered weaponry.

At the International Military Technical Forum “Army 2022” military expo in Kubinka, near Moscow, Russia, a robot dog was seen sporting an all-black outfit resembling that of a ninja, with only its eyes showing. Though its apparel makes it difficult to glean much about the robot itself, Twitter users pointed out that its eyes appear to resemble that of a robotic dog available on Amazon for about $3,730 on AliExpress.

Russia’s state-owned news agency RIA Novosti shared footage of the robot dog, dubbed the M-81 by its creators. On the robot’s back is an RPG-26 rocket launcher that is longer than the robot itself, similar to a recent example of an AliExpress robot dog equipped with a submachine gun in Moscow. According to the M-81’s developers, the robot is a “sample of the M-81 robotic system, capable of conducting aimed shooting and transporting weapons,” and though non-combat related applications involve use “in the emergency zone for reconnaissance, passage through rubble and delivery of medicines.”

Russian President Vladimir Putin was also in attendance at the expo, bragging during a speech that Russia’s weapons are more advanced than other countries.

“We are talking about high-precision weapons and robotics, combat systems based on new physical principles. Many of them are years, perhaps even decades ahead of their foreign counterparts, and significantly superior in terms of tactical and technical characteristics,” said Putin.

Week 3 of the 2022 NFL season is here, and we already have some big matchups in store.The Buffalo Bills have looked like...
Read more

Get Fashion Month Ready With Hypebae

Estonia said to block Israelis with Russian citizenship from entering

Several Israelis with dual Russian citizenship were barred by Estonian authorities over the past few days from crossing into the country from Russia,...
Read more

Friends Maggie Winter and Max Bonbrest launched AYR in 2014 amid a bit of a DTC craze, but the brand has proven to...
Read more