Kohavi landed in the US on Sunday morning for five days of meetings with senior officials focused on the Iranian threat, the IDF said.

On Monday, Kohavi met with Chairman of the US Joint Chiefs of Staff Mark Milley, US National Security Adviser Jake Sullivan, and CIA Director William Burns. He also met with the Israel Ambassador to the US Michael Herzog.

“During the discussions, it was agreed that we are at a critical point in time that requires the acceleration of operational plans and cooperation against Iran and its terrorist proxies in the region,” Kohavi said in remarks provided by the IDF Tuesday.

“On the one hand, Iran is under many economic, military, and internal pressures, and on the other hand, it continues to promote its nuclear program. The IDF strongly promotes all operational plans against the Iranian threat,” Kohavi said.

The Kan public broadcaster reported the Israeli and US militaries would hold an imminent drill simulating strikes against Iran and its proxies, citing the IDF, but a military source said they were unaware of such a drill, and there was no mention of such plans in the statement.

The Israeli statement marked a departure from an earlier US readout of Kohavi’s meeting with Sullivan, which focused on reaching a negotiated solution to thwart Iran’s nuclear intentions, echoing Biden administration talking points.

“The two discussed the importance of taking steps to de-escalate the security situation in the West Bank, and Mr. Sullivan reiterated that a negotiated two-state solution remains the best avenue to achieve a lasting peace,” the White House readout said. 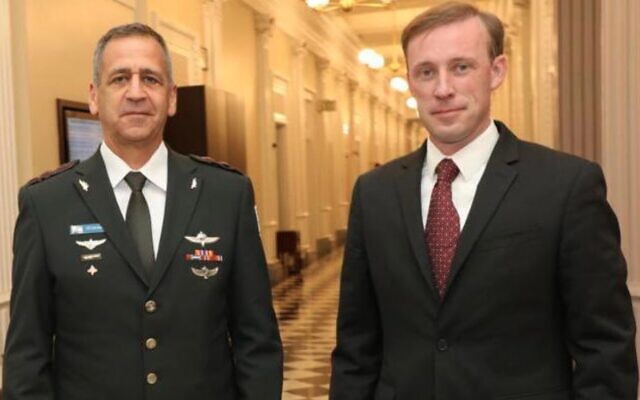 Jerusalem opposes US President Joe Biden’s attempts to revive the nuclear agreement between Tehran and world powers that traded sanctions reliefs for curbs on the Islamic Republic’s nuclear program.

But that disagreement has been less relevant lately, as nuclear talks have fizzled and the US has preferred to focus on addressing the ongoing civilian protests in Iran against the regime.

Iran said Tuesday it had begun producing uranium enriched to 60 percent at its Fordo plant, a level it never reached before, and a short, technical step away from the 90% enrichment necessary to produce a nuclear weapon.

The International Atomic Energy Agency confirmed the move and said Tuesday that its chief, Rafael Grossi, had reported the development to its member states.

The US expressed “deep concern” Tuesday over the announcement, which was also condemned by Germany, France and the UK.

“We’re going to make sure we have all options available to the president,” said White House national security spokesman John Kirby.

Israel has been pushing for the US to prepare military contingency plans in order to prevent Iran from obtaining a nuclear weapon. Biden has said he is prepared to use military force if necessary, but still prefers exhausting the diplomatic route first.

In light of growing uncertainty regarding a return by Iran to the 2015 nuclear deal with world powers amid long-stalled negotiations, the past two years have seen the IDF ramp up its efforts to prepare a credible military threat against Tehran’s nuclear sites. 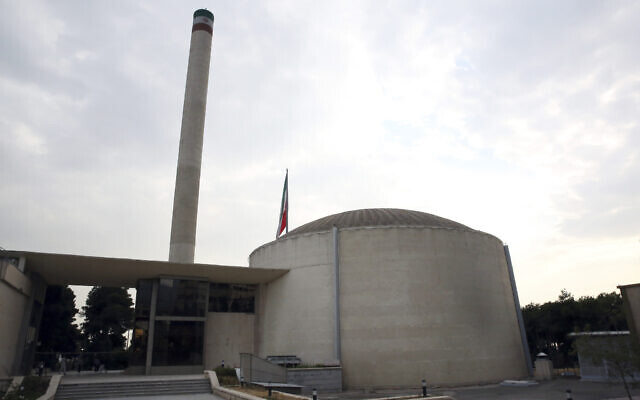 This September 1, 2014 file photo, shows a nuclear research reactor at the headquarters of the Atomic Energy Organization of Iran. (AP Photo/Vahid Salemi, File)

European Union-sponsored talks have failed to bring the US back into the 2015 nuclear deal with Iran known as the Joint Comprehensive Plan of Action.

The deal, signed between Iran and the US, UK, France, Germany, China and Russia, has unraveled since the Trump administration pulled out in 2018. The US reimposed stiff sanctions and Iran responded by dropping many of its own commitments to the pact while also ramping up its uranium enrichment to levels far beyond the agreement’s limits.

While Iran long has maintained its program is peaceful, non-profileration experts warn Tehran has enough 60%-enriched uranium to reprocess into fuel for at least one nuclear bomb.

Israeli officials have also warned of Iran’s proxies across the region, from Hezbollah in Lebanon to the Houthis in Yemen.

The official Washington visit marked Kohavi’s final scheduled one as chief of staff, as his tenure is set to end on January 17.

Milley, who met with Kohavi on Monday, awarded his Israeli counterpart the Legion of Merit commander degree.

Jacob Magid and AFP contributed to this report.

I joined The Times of Israel after many years covering US and Israeli politics for Hebrew news outlets.

I believe responsible coverage of Israeli politicians means presenting a 360 degree view of their words and deeds – not only conveying what occurs, but also what that means in the broader context of Israeli society and the region.

That’s hard to do because you can rarely take politicians at face value – you must go the extra mile to present full context and try to overcome your own biases.

I’m proud of our work that tells the story of Israeli politics straight and comprehensively. I believe Israel is stronger and more democratic when professional journalists do that tough job well.

Your support for our work by joining The Times of Israel Community helps ensure we can continue to do so.

We’re really pleased that you’ve read X Times of Israel articles in the past month.

That’s why we started the Times of Israel ten years ago – to provide discerning readers like you with must-read coverage of Israel and the Jewish world.

So now we have a request. Unlike other news outlets, we haven’t put up a paywall. But as the journalism we do is costly, we invite readers for whom The Times of Israel has become important to help support our work by joining The Times of Israel Community.

For as little as $6 a month you can help support our quality journalism while enjoying The Times of Israel AD-FREE, as well as accessing exclusive content available only to Times of Israel Community members.

Thank you,
David Horovitz, Founding Editor of The Times of Israel