DOHA, Qatar — Wearing the white shirt of the Iranian national soccer team, Mohammad turned to his friend with a broad smile and told him, “I’m talking to an Israeli journalist!” a notion so ridiculous to the two men that it elicited a bout of laughter, in which I very tentatively joined.

As the sun set behind Khalifa International Stadium, Iranian fans filed into the mega venue in western Doha for their national team’s clash with England on Monday. Outside the grounds, much of the media circus was focused on the rare opportunity to hear from Iranian citizens face-to-face, away from the prying eyes of the regime.

As I approached people wearing Iranian colors for comment, many seemed happy to talk — that is, until I quickly introduced myself and the publication I write for. At that point the polite excuses began. “I’m in a rush, sorry,” was a common refrain.

Mohammad, a PhD student in social communication and media at Tehran University, was prepared to talk, however. After he and his friend had stopped giggling at the sheer absurdity of speaking to The Times of Israel, he posited that the anti-regime protests in his country were being fueled by Western media, which he said was far more “powerful” than Iran’s “weak” media. “It’s a media war,” he said as he waited patiently to pass through the stadium’s strict security protocol.

Mohammad pointed out that “all countries have social problems — everyone, even Israel,” but insisted “we have to make a good social situation for our people.”

He said women’s rights are “an agenda in Iran, in the Middle East, in Qatar. If you pay attention to the media you can see the human rights problem in Qatar too. I see the problem as global, not just Iran.” 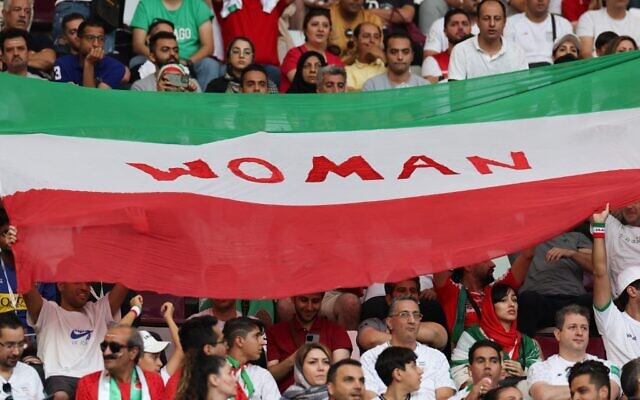 Iran supporters wave their national flag bearing the word “Woman” as they cheer during the Qatar 2022 World Cup Group B football match between England and Iran at the Khalifa International Stadium in Doha on November 21, 2022. (Photo by Fadel Senna / AFP)

Two Iranians from Tehran who operate a travel agency told me that while it was difficult for them to comment, change in Iran was needed.

When asked what kind of change, one of them mimed stroking an imaginary long beard, a subtle reference to Iran’s Ayatollah Ali Khameini and the Shiite clerics who control their country.

Another man began to discuss the myriad problems in Iran before I had managed to say “Times of Israel,” then halted mid-sentence to ask, “Which publication are you from?” At that point he ended our interview with a flick of his wrist, adding curtly, “And we’re done, bye-bye.”

It was the only instance of anything approaching hostility I encountered when  identifying myself as a reporter from Israel and speaking to Iranians. Most diplomatically declined to speak, some explaining it would be “problematic” for them. 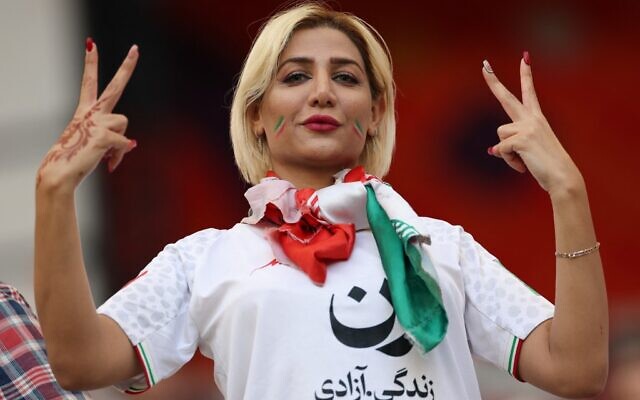 An Iran supporter waits for the start of the Qatar 2022 World Cup Group B football match between England and Iran at the Khalifa International Stadium in Doha on November 21, 2022. (Photo by Fadel Senna/AFP)

Even those who did speak understandably opted not to be photographed or give their full names.

One fan who spoke readily was Navid Dozadeh, 22, a professional soccer player for the Al-Ahli club, which competes in Qatar’s top Stars League. Dozadeh’s family lives with him in Doha, though he has many relatives in Iran.

The Al-Ahli striker suggested that Iran’s strict hijab laws were frivolous, demonstrating with his hand the different parts of the head that the headscarf is required to cover. 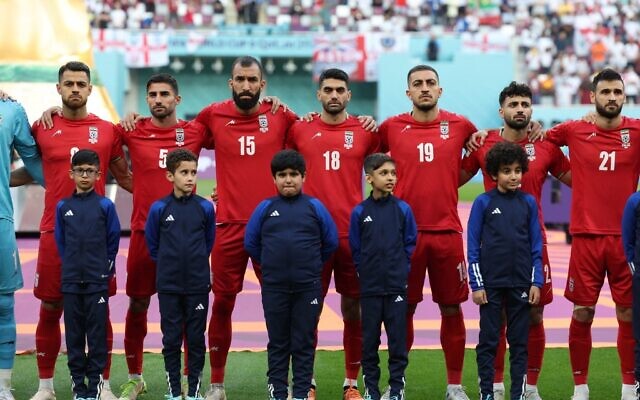 Iran players listen to the national anthem ahead of the Qatar 2022 World Cup Group B football match between England and Iran at the Khalifa International Stadium in Doha on November 21, 2022. (FADEL SENNA/AFP)

While women in Iran are mandated by law to wear the Islamic headscarf, many Iranian women entering the stadium on Monday were bareheaded.

Dozadeh said that if he were in Tehran, he would certainly join the protest movement. “Everyone is joining,” he exclaimed.

The protest movement is “gonna change everything. It’s going to be the same like Europe. I hope so,” he added.

Inside the stadium, the entire Iranian soccer team, affectionately known by fans as Team Melli, chose to support the protest movement by refraining from singing the national anthem.

In the stands, Iranian fans, both men and women, could be heard booing the anthem when it was played. In Iran, women are generally banned from entering soccer stadiums.

Videos purportedly filmed in a Tehran neighborhood showed Iranian fans cheering during the game. According to some reports, however, the cheers were for goals scored by England in its 6-2 victory, not Iran.

“Iran is the only country in the World Cup that its people want their national football team to lose since the team doesn’t represent the people but the regime,” Masih Alinejad, a prominent Iranian women’s rights activist, posted on Twitter.

I joined The Times of Israel after many years covering US and Israeli politics for Hebrew news outlets.

I believe responsible coverage of Israeli politicians means presenting a 360 degree view of their words and deeds – not only conveying what occurs, but also what that means in the broader context of Israeli society and the region.

That’s hard to do because you can rarely take politicians at face value – you must go the extra mile to present full context and try to overcome your own biases.

I’m proud of our work that tells the story of Israeli politics straight and comprehensively. I believe Israel is stronger and more democratic when professional journalists do that tough job well.

Your support for our work by joining The Times of Israel Community helps ensure we can continue to do so.

We’re really pleased that you’ve read X Times of Israel articles in the past month.

That’s why we started the Times of Israel ten years ago – to provide discerning readers like you with must-read coverage of Israel and the Jewish world.

So now we have a request. Unlike other news outlets, we haven’t put up a paywall. But as the journalism we do is costly, we invite readers for whom The Times of Israel has become important to help support our work by joining The Times of Israel Community.

For as little as $6 a month you can help support our quality journalism while enjoying The Times of Israel AD-FREE, as well as accessing exclusive content available only to Times of Israel Community members.

Thank you,
David Horovitz, Founding Editor of The Times of Israel