By Madeleine Ross For Mailonline

England star Mason Mount has been accused by fans of singing ‘God save our gracious Queen’ during the opening moments of the Three Lions’ first World Cup clash with Iran in Qatar.

While singing the national anthem, the 23-year-old appeared to have forgotten new monarch King Charles III has been on the throne since the death of his mother Queen Elizabeth II, on September 8,

The lyrics to the national anthem changed when King Charles ascended to the throne after the death of his mother.

The correct lyrics for the anthem would have been ‘God save our Gracious King’ when England played Germany on September 26, meaning Mount has had to sing the anthem since the death of Queen Elizabeth II.

Mount might not have been the only player to make the mistake, with fans suggesting that some of ‘the boys’ also sang ‘gracious Queen’.

English players also took the knee in an anti-racism gesture before the beginning of the game. 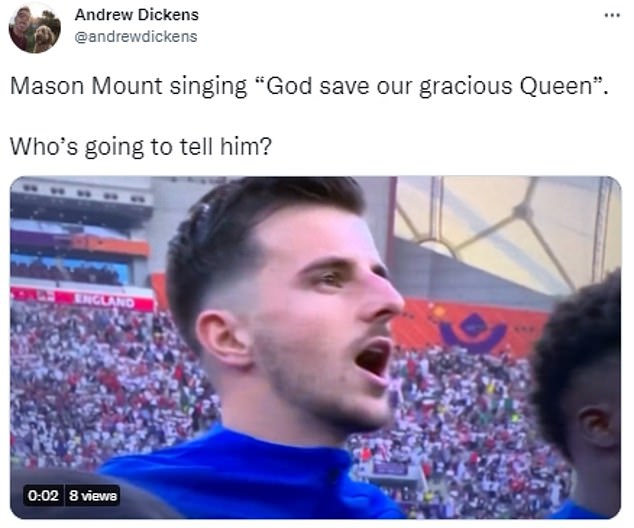 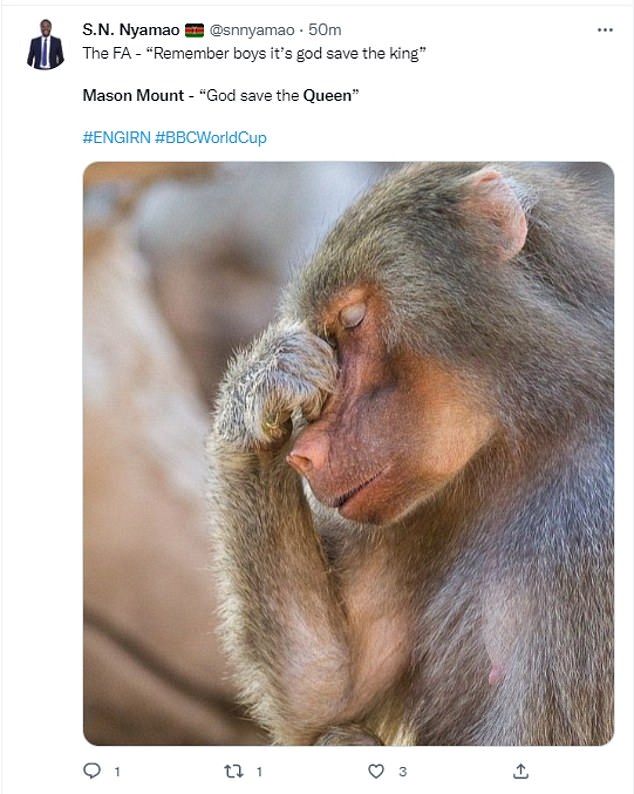 England fans on social media suggested the mistake was playing on Mason Mount’s mind throughout the first half. England found themselves 3-0 up after the a dominant start

What is the national anthem and what are the lyrics?

The lyrics to the national anthem, ‘God Save The King’ changed as a result of the death of Queen Elizabeth II on September 8.

Only the first verse of the anthem is typically sung before large sporting events, but there are five verses.

The traditional first verse is:

God save our gracious King,

God save the King!

Long to reign over us,

God save the King!

The composer of the anthem is unknown but it was adopted as a national anthem in 1745 during the reign of George II.

The original lyrics were different and included monarch’s names but this was changed when it was realised that ‘Victoria’ didn’t fit.

England were 3-0 up against Iran at half time after a dominant first half in their their first game in the World Cup this afternoon.

The anthem slip-up doesn’t seem to have affected Mount’s game, as he had the most fouls won across the two teams during the first half.

He also completed more successful take-ons and won more duels than any other player across either side.

Iranian players did not sing their national anthem in Doha this afternoon as a mark of respect to those who have lost their lives in civil unrest in the country.

The players stood stony-faced in an apparent sign of solidarity with protests engulfing Iran.

Some members of the crowd at the Khalifa International Stadium booed the anthem while waving flags in support of protesters. Women standing in the crowd were visibly emotional as they clapped the team.

Iran has been wracked by more than two months of anti-regime protests sparked by the death of Mahsa Amini who died in police custody after being arrested for failing to wear a compulsory hijab.

It is expected that Iranian players will not celebrate goals, after striker Sardar Azmoun refused to celebrate an equaliser against Senegal in a pre-tournament friendly.

Multiple players have updated their social media profiles to black spaces as a sign of solidarity.

Iran has closed all football matches to the public since the protests erupted.

The Three Lions were 3-0 up against Iran at half time after dominating in the first half.

Youngster Jude Bellingham put the side ahead in the opening minutes of the game before goals from Bukayo Saka and Raheem Sterling ensured the Three Lions a strong start to the second half.

A second goal from Saka early in the second half extended England’s lead against Iran to 4-0. 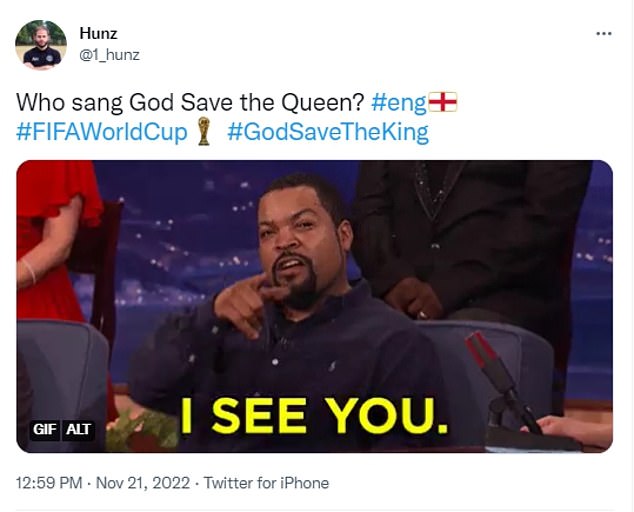 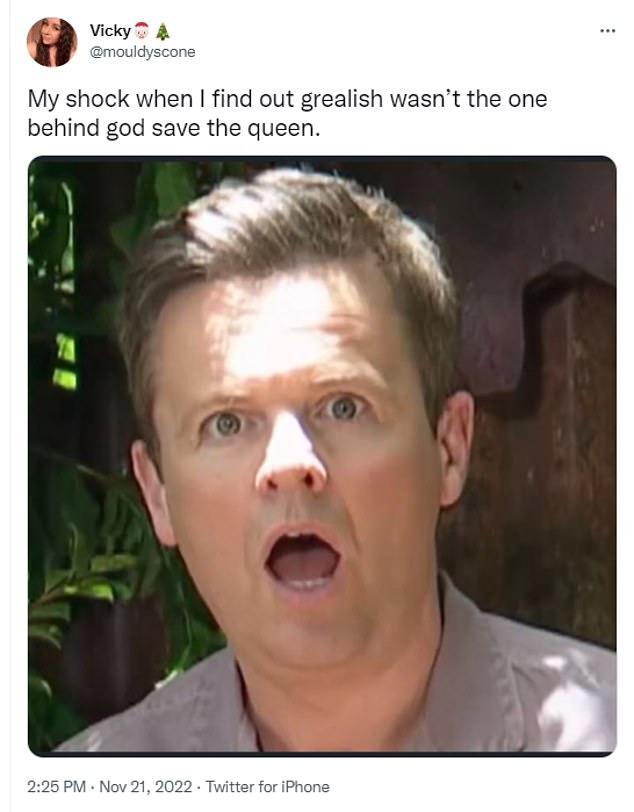 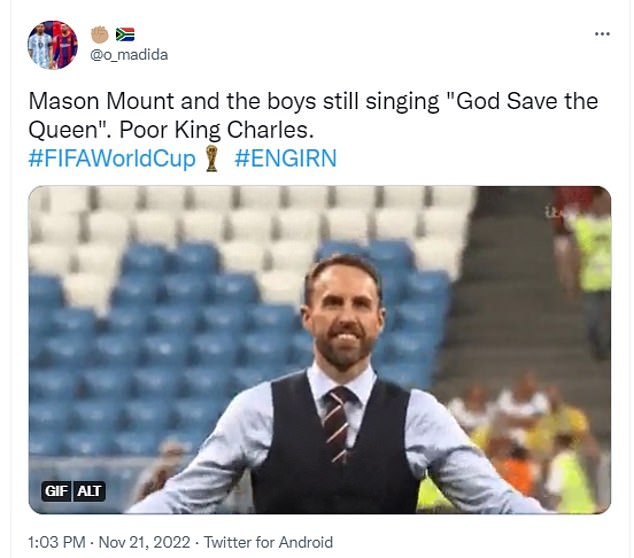 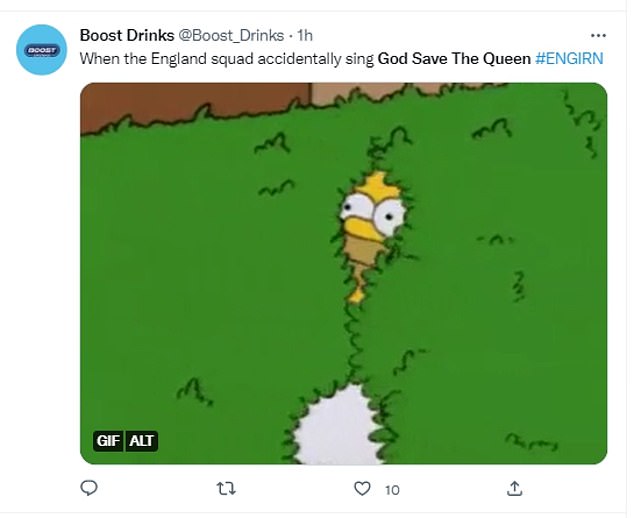 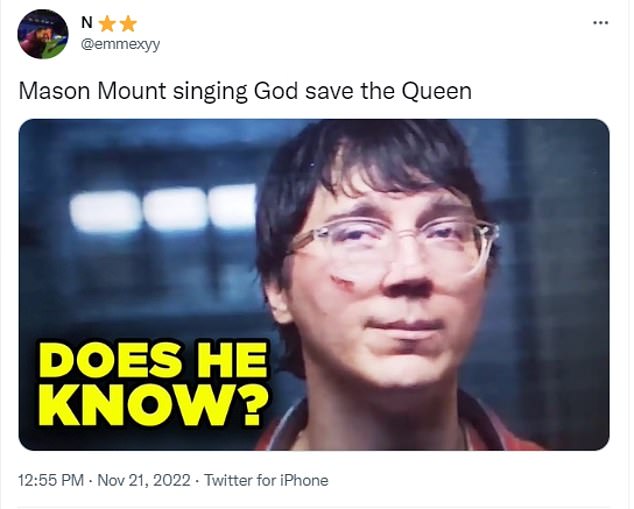 Some users made memes of the slip-up, implying that other members of the team had made a similar mistake

But Iran clawed one back at 65 minutes as Mahdi Torabi slotted one past England goalkeeper Jordan Pickford.

But England continued their masterclass and regained their impressive lead just minutes later, taking the score to 5-1 as Marcus Rashford scored seconds after coming on.

England pulled ahead once more with a goal from Jack Grealish before conceding a soft penalty in extra time, taking the final score to 6-2.

The Three Lions are in a competitive draw in Group B with all the teams in their group ranked in FIFA’s top 20.

England will play the U.S. on Friday and Wales on November 29.

The FA suspended all football as a mark of respect when the death of Queen Elizabeth II was announced.

Football at all levels – from Premier League to grassroots – was postponed by the governing body.

Games were reinstated on September 12, except those that were scheduled to take place on the day of the state funeral.